This is just a quick blog post to update you on some rather interesting research that will be coming out led by Eyal Ronen. At Black Hat USA 2016 I did some teardown of the Philips Hue system, and described the possibility of a lightbulb worm.

Check this landing page which now has a draft PDF of what that became. This draft paper details how you can (1) recover the encryption keys used to encrypt the firmware updates, and thus encrypt/sign your own images, and (2) details a bug specific to a version of a range-checking protocol which allows reflashing of bulbs over longer distances. The end result is this basically solves all the roadblocks I had identified as stopping the lighbulb worm from actually happening [NB: the distance-check bug has been FIXED already in firmware updates which solves this specific spreading vector].

To me the most interesting part is a demonstration of side-channel power analysis being useful for breaking a rather good encrypted bootloader. To be clear the Philips Hue does a great job of implementing a bootloader on an IoT device… it’s one of the better I’ve seen, especially considering we are talking about a lightbulb. But it’s very very difficult to hide from side-channel power analysis and other “hands on” embedded hardware attacks, instead it’s better (but more expensive logistically) to push the solutions to the higher-level architecture. If each bulb had a unique encryption key (maybe derived from the MAC address using an algorithm on a secure server if you don’t want to store all those keys) it would provide an excellent layer of defense.

I’m working on making a description of the AES-CCM attack, which will be posted to the wiki page.

Q: What does that mean to someone using Hue, is it safe?

A: Philips released a OTA update to fix the bug that allows spreading over longer distances (October 3rd update). This is a great example of a fast response by a company who takes this stuff seriously. Basically – if I was choosing a smart light platform, I’d probably use Hue (I have a few of them in my house too).

A: This isn’t a FAQ type answer – but you can see an intro video I made. Basically we use tiny variations in power consumption of a device as it’s running to determine information about secrets held within the device.

Q: What if I want more information?

A: Please contact Eyal for more details, if you want to discuss specific questions, etc. Note the Philips-specific details (such as scripts, keys, etc) will never be released, please don’t ask for them.

Q: Does a worm exist?

A: NO. It would be extremely reckless to make such a worm, as it would be VERY hard to contain the spread should you have a bunch of Hue devices around you. Instead that research paper demo’d all the pieces, but stopped short of putting them together (we wouldn’t want a criticality accident).

At Black Hat 2016 I presented on some reverse engineering of the Philips Hue (also see my other post about getting root on it, which was part of that presentation).

If you were at the talk, you would have also seen mention that you’ll want to keep your eyes out for future publications by Eyal Ronen. You can see his website for more research related to the Hue as well, and follow him on twitter @eyalr0. He’s been doing some work in parallel that I think will do more than just R.E. the bulbs (as I did), and actually bring some of my `possible’ attacks to become real proof-of-concepts.

Summary of the work (to make it clear):

You can get the full slides here too:

Here’s a copy of the very large whitepaper I wrote too:

This whitepaper is a bit of a ‘data dump’ and ~48 pages of random stuff. But useful if you are interested in pushing this further! 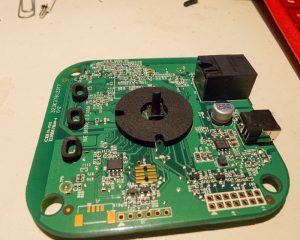